Jeremy Shu-How Lin (born August 23, 1988) is an American professional basketball player for the Charlotte Hornets of the National Basketball Association (NBA). He unexpectedly led a winning turnaround with the New York Knicks in 2012, which generated a global following known as "Linsanity". After receiving no athletic scholarship offers out of high school and being undrafted out of Harvard University, Lin reached a partially guaranteed contract deal in 2010 with his hometown Golden State Warriors. He seldom played in his rookie season and was assigned to the NBA Development League (D-League) three times. He was waived by the Warriors and the Houston Rockets the following preseason before joining the New York Knicks early in the 2011–12 season. He continued to be played sparingly and again spent time in the D-League. In February 2012, he led a winning streak by New York while being promoted to the starting lineup. In the summer of 2012, Lin signed a three-year contract with the Rockets, for whom he played two seasons before the Los Angeles Lakers acquired him in a trade. He played one season with the Lakers before signing with the Charlotte Hornets. Lin is one of the few Asian Americans in NBA history, and the first American of Chinese or Taiwanese descent to play in the league. He is also known for his public expression of his Christianity. 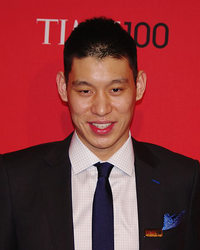 image credit
Jeremy Lin by David Shankbone, is licensed under cc-by-3.0, resized from the original.