Jane Fonda (born Lady Jayne Seymour Fonda; December 21, 1937) is an American actress, writer, political activist, former fashion model, and fitness guru. She rose to fame in the 1960s with films such as Barbarella and Cat Ballou and, with interruptions, has appeared in films ever since. She has won two Academy Awards, an Emmy Award and seven Golden Globe Awards (including 3 special awards) among many other accolades. In 2011, she published a second memoir, Prime Time. 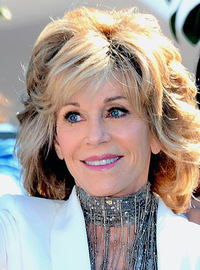 image credit
Jane Fonda by Georges Biard, is licensed under cc-by-sa-3.0, resized from the original.