James Francis Cameron (born August 16, 1954) is a Canadian film director, film producer, deep-sea explorer, screenwriter, and editor who has directed the two biggest box office films of all time. He first found success with the science-fiction hit The Terminator (1984). He then became a popular Hollywood director and was hired to write and direct Aliens (1986); three years later he followed up with The Abyss (1989). In October 2013, a new species of frog Pristimantis jamescameroni from Venezuela was named after him in recognition of his efforts in environmental awareness, in addition to his public promotion of veganism. 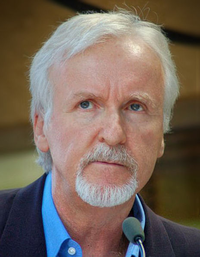 image credit
James Cameron by Angela George, is licensed under cc-by-sa-3.0, resized from the original.