Jada Koren Pinkett Smith (/ˈdʒeɪdə ˈpiːŋkɨt ˈsmɪθ/; born September 18, 1971) is an American actress, singer-songwriter, and businesswoman. She began her career in 1990, when she made a guest appearance in the short-lived sitcom True Colors. She starred in A Different World, produced by Bill Cosby, and she featured opposite Eddie Murphy in The Nutty Professor (1996). The couple founded the Will and Jada Smith Family Foundation, a charity organization which focuses on inner-city youth and family support and has worked with non-profit organizations like YouthBuild and the Lupus Foundation of America. 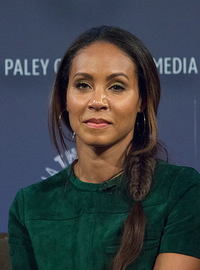 image credit
Jada Pinkett Smith by Dominick D, is licensed under cc-by-sa-2.0, resized from the original.