Jacqueline Lee (Bouvier) Kennedy Onassis (pronounced /ˌˈdʒækliːn ˈliː ˈbuːvieɪ/) commonly known as "Jackie" (July 28, 1929 – May 19, 1994) was the wife of the 35th President of the United States, John F. Kennedy, and First Lady of the United States during his presidency from 1961 until his assassination in 1963. Five years later she married Greek shipping magnate Aristotle Onassis; they remained married until his death in 1975. For the final two decades of her life, Jacqueline Kennedy Onassis had a career as a book editor. She is remembered for her contributions to the arts and preservation of historic architecture, her style, elegance, and grace. She was a fashion icon; her famous ensemble of pink Chanel suit and matching pillbox hat has become symbolic of her husband's assassination and one of the lasting images of the 1960s. 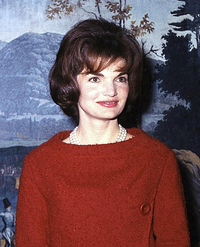