John Joseph "Jack" Nicholson (born April 22, 1937) is an American actor, film director, producer, and writer. Throughout his career, Jack Nicholson has portrayed unique and challenging roles, many of which include dark portrayals of neurotic and psychopathic characters. Nicholson's 12 Oscar nominations make him the most nominated male actor in the history of the Academy Awards. Notable films in which he has starred include Easy Rider, Five Easy Pieces, The Last Detail, Chinatown, The Passenger, The Shining, Reds, Wolf, A Few Good Men, The Pledge, About Schmidt, and The Departed. 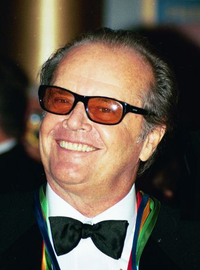 image credit
Jack Nicholson by Kingkongphoto & www.celebrity-photos.com, is licensed under cc-by-sa-2.0, resized from the original.