Howard Michael "Howie" Mandel (born November 29, 1955) is a Canadian comedian, actor, television host, and voice actor. He is well known as host of the NBC game show Deal or No Deal, as well as the show's daytime and Canadian-English counterparts. Before his career as a game show host, Mandel was best known for his role as rowdy ER intern Dr. Wayne Fiscus on the NBC medical drama St. Elsewhere. He is also well known for being the creator and star of the children's cartoon Bobby's World. On June 6, 2009, he hosted the 2009 Game Show Awards on GSN. Mandel became a judge on NBC's America's Got Talent, replacing David Hasselhoff, in the fifth season of the reality talent contest. Mandel has mysophobia (an irrational fear of germs) to the point that he does not shake hands with anyone, including contestants on Deal or No Deal, unless he is wearing latex gloves. 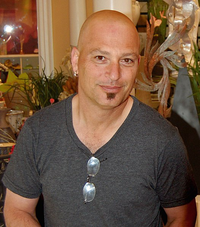 image credit
Howie Mandel by https://www.flickr.com/photos/matthewphx/, is licensed under cc-by-sa-3.0, resized from the original.