Irving Ampofo Adjei (born 6 October 1994), known professionally as Headie One, is a British rapper. In 2018, he released the mixtape The One, which included the single "Know Better", featuring rapper RV, that became an "underground hit". He is a member of the drill rap group OFB. Headie One is best known for his track "18Hunna" featuring rapper Dave, which peaked at number 6 on the UK Singles Chart. He has released seven mixtapes, four solo mixtapes and three mixtapes with fellow OFB rapper RV. In 2019, Headie One released his seventh and first mainstream mixtape titled Music x Road, which peaked at number 5 on the UK Albums Chart. He has since released Edna which peaked at number one on the UK Albums Chart, an album which pays homage to his mother, Edna Adjei. 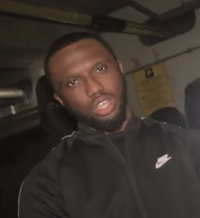 image credit
Headie One by Mixtape Madness, is licensed under cc-by-sa-3.0, resized from the original.