Harshavardhan Rane. (born 16 December 1983) is an Indian film actor known for his works in Telugu cinema, and Bollywood. He is best known for Thakita Thakita (2010), Prema Ishq Kaadhal (2013) and for playing the missing husband of Nayanthara's character in Anaamika (2014). He has shot for his Bollywood movie Satra Ko Shaadi Hain, which is produced by actor-turned producer John Abraham. It is scheduled to release in 2016. His Bollywood Debut is with 'Sanam Teri Kasam' Directed by Vinay and Radhika and was released by Eros International on 5 February 2016. Over the years, he has acted in several Telugu films, including Telugu psychological thriller Maaya, Comedy movie "Brother of Bommali". Harshvardhan Rane follows caveman's diet. Previously he was slated to make Bollywood debut with Sanjay Leela Bhansali's Goliyon Ki Raasleela Ram-Leela (2013), but opted out as it wanted an eleven-month contract.In April 2015 he was roped to play as Rashi Khanna's love interest in Ravi Teja's Bengal Tiger.his Bollywood Debut movie Sanam Teri Kasam has been released on 5th February. In this film, he is pairing with Pakistani actress Mawra Hocane 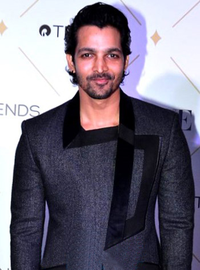 image credit
Harshvardhan Rane by Bollywood Hungama, is licensed under cc-by-3.0, resized from the original.