Hank Williams, Sr. (/hæŋk wɪljəmz /; September 17, 1923 – January 1, 1953), born Hiram King Williams, was an American singer-songwriter and musician. Regarded as one of the most significant country music artists, Williams recorded 35 singles (five released posthumously) that would place in the Top 10 of the Billboard Country & Western Best Sellers chart, including 11 that ranked number one. He has been inducted into multiple music halls of fame. 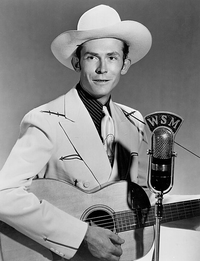