Gwyneth Kate Paltrow (/ˈɡwɪnɨθ ˈpæltroʊ/; born September 27, 1972) is an American actress, singer, and food writer. She made her acting debut on stage in 1990 and started appearing in films in 1991. After appearing in several films throughout the decade, Paltrow gained early notice for her work in films such as Seven (1995) and Emma (1996) (in which she played the title role). com and author of two cookbooks: My Father's Daughter: Delicious, Easy Recipes Celebrating Family & Togetherness, and It's All Good. 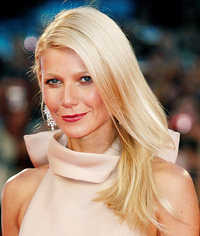 image credit
Gwyneth Paltrow by http://www.andrearaffin.com, is licensed under cc-by-sa-3.0, resized from the original.