Florence Ballard Chapman (born Florence Glenda Ballard, June 30, 1943 – February 22, 1976), was an American recording artist and vocalist, best known as one of the founding members of the popular Motown vocal group The Supremes. As a member, Ballard sang on sixteen top forty singles with the group, including ten number-one hits.In 1967, Ballard was removed from the Supremes lineup and the singer signed with ABC Records in 1968 forging on an unsuccessful solo career. 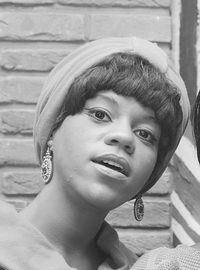 image credit
Florence Ballard by Blackcat, is licensed under cc-by-sa-3.0, resized from the original.