Fernando Villalona, the first artist named "El Mayimbe" (born in Loma de Cabrera, Dajabón Province on May 7, 1955, Ramón Fernando Villalona Évora), is a Dominican merengue singer that began singing in the early 1970s, his popularity started to grow by the late 1970s and has not declined ever since.Fernando began singing at a very early age and became popular after participating in "El Festival de la Voz", an amateur TV talent show. After that, merengue icon Wilfrido Vargas hired him to be part of his group Los Hijos del Rey but Fernando and the group would soon be separated after his popularity became larger than the group itself. He would then go into a period of drugs and isolation but never stopped singing, recording some of his best music during that period. In 2012, Villalona recorded "El Color de tu Mirada" with American singer/songwriter Victoria Daly. The music video was directed by Rene Brea in the Dominican Republic. It went to be nominated for "Best Music Video" at the Soberano Awards in 2013. Villalona began recording two singles with Latin sensation, Olga Tañon. Recording began in April, set to be released on her upcoming album. Songs such as "Tabaco y ron", "Celos,", "Te Amo Demasiado,","La Hamaquita", "Dominicano Soy," "Sonámbulo," and "Carnaval" among others became popular in the 1980s. "Quisqueya," "No Podrás," "Música Latina," "Retorno," and "Me he Enamorado" were some of his biggest hits in the 1990s. In recent years he has had some health problems making performing a difficult task. But besides the fact that he has not been able to perform frequently, he probably still is the most important merengue singer in Dominican history. He was married to Evelyn Jorge a woman of Puerto Rican origin and they have a daughter named Paloma. 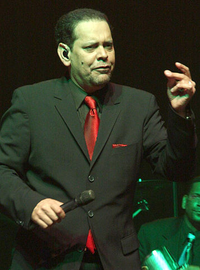 image credit
Fernando Villalona by 809 New York Magazine, is licensed under cc-by-2.0, resized from the original.