Eric Dane (born November 9, 1972) is an American actor. After appearing in television roles throughout the 1990s and 2000s, he became known for playing Dr. Mark "McSteamy" Sloan on the medical drama television series Grey's Anatomy, and has recently branched into film, co-starring in Marley & Me, Valentine's Day, and Burlesque. 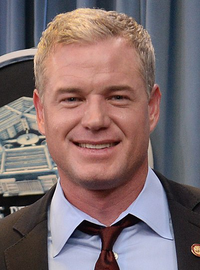 image credit
Eric Dane by DoD News Features, is licensed under cc-by-2.0, resized from the original.