Mary Elle Fanning (born April 9, 1998) is an American actress. She is the younger sister of actress Dakota Fanning and mainly known for her starring roles in Phoebe in Wonderland, Somewhere, and We Bought a Zoo. In 2011, Fanning starred in her breakout role as Alice Dainard in J. J. Abrams' sci-fi-drama blockbuster, Super 8. For this role she received overwhelming critical acclaim and was often cited as one of the film's best aspects. She received nominations for a Saturn Award, a Young Artist Award, a Broadcast Film Critics Association Award, a Teen Choice Award, a Scream Award, an MTV Movie Award, and more including a special Spotlight Award at the Hollywood Film Festival. 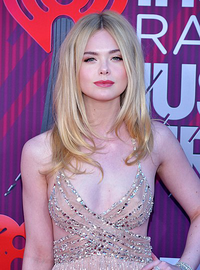 image credit
Elle Fanning by Glenn Francis, is licensed under cc-by-sa-4.0, resized from the original.