Elia Kazan (born Elias Kazantzoglou, Greek: Ηλίας Καζαντζόγλου; Turkish: Elias Kazancıoğlu; September 7, 1909 – September 28, 2003) was a Greek-American director, producer, writer and actor, described by The New York Times as "one of the most honored and influential directors in Broadway and Hollywood history". He was born in Istanbul, Ottoman Empire, to ethnic Greek parents. After studying acting at Yale, he acted professionally for eight years, later joining the Group Theater in 1932, and co-founded the Actors Studio in 1947. " In 2010, Martin Scorsese co-directed the documentary film A Letter to Elia as a personal tribute to Kazan. 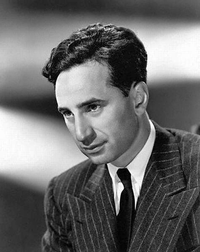