Edward John "Eddie" Izzard (/ˈɪzɑrd/; born 7 February 1962) is an English stand-up comedian, actor and writer. His comedy style takes the form of rambling, whimsical monologue and self-referential pantomime. He had a starring role in the television series The Riches as Wayne Malloy and has appeared in many films such as Ocean's Twelve, Ocean's Thirteen, Mystery Men, Shadow of the Vampire, The Cat's Meow, Across the Universe, and Valkyrie. In 2013, Eddie Izzard embarked on a world tour entitled Force Majeure, with dates that run through 2014. 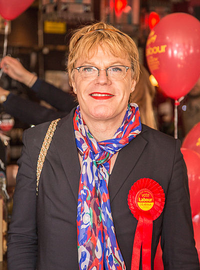 image credit
Eddie Izzard by Giuseppe Sollazzo, is licensed under cc-by-sa-2.0, resized from the original.