Edward Walter "Ed" Gillespie (born August 1, 1961) is an American Republican political strategist who served as the 61st Chairman of the Republican National Committee and Counselor to the President in the George W. Bush administration. Gillespie, along with Democrat Jack Quinn, founded Quinn Gillespie & Associates, a bipartisan lobbying firm. Gillespie is also the founder of Ed Gillespie Strategies, a strategic consulting firm that provides high-level advice to companies and CEOs, coalitions, and trade associations. In January 2014, Gillespie announced he was running for Virginia's U.S. Senate seat currently held by Mark Warner in the 2014 election, and on June 7, 2014, he received the Republican nomination. In October 2015, Gillespie announced his plans to run for Governor of Virginia in 2017. 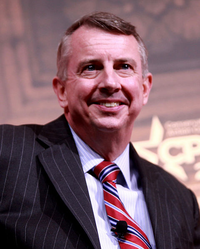 image credit
Ed Gillespie by Gage Skidmore, is licensed under cc-by-sa-3.0, resized from the original.