Drew Allison Carey (born May 23, 1958) is an American actor, comedian, sports executive, and game show host. After serving in the U.S. Marine Corps and making a name for himself in stand-up comedy, Carey eventually gained popularity starring on his own sitcom, The Drew Carey Show, and serving as host of the U.S. version of the improv comedy show Whose Line Is It Anyway?, both of which aired on ABC. 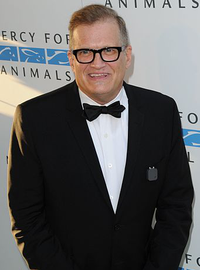 image credit
Drew Carey by Mercy For Animals MFA, is licensed under cc-by-2.0, resized from the original.