Dennis Miller (born November 3, 1953) is an American stand-up comedian, talk show host, political commentator, sports commentator, actor, television personality, and radio personality. He is known for his critical assessments laced with pop culture references. He rose to fame as a cast member of Saturday Night Live in 1985, and subsequently hosted a string of his own talk shows on HBO, CNBC and in syndication. He currently hosts a daily, three-hour, self-titled talk radio program, nationally syndicated by Dial Global.He is listed as 21st on Comedy Central's 100 greatest stand up comedians of all time. 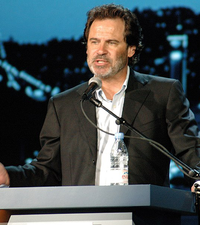 image credit
Dennis Miller by Anetode, is licensed under cc-by-2.0, resized from the original.