Darryl Dwayne Granberry Jr. (born October 10, 1997), known professionally as DDG or PontiacMadeDDG, is an American rapper, singer, songwriter and YouTuber. He started making videos in 2015 when he was enrolled at Central Michigan University and later dropped out. In 2018, he signed to Epic Records, and later in 2020, he founded his own record label, Zooted Ent. with longtime managers, Eric O'Connor, Luis C. Arellano and Dimitri Hurt of MPM Partners. 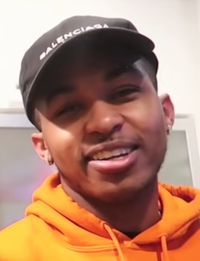 image credit
DDG (rapper) by B Lou/Lou Wop, is licensed under cc-by-3.0, resized from the original.