David Krumholtz (born May 15, 1978) is an American actor, known for playing Charlie Eppes in the CBS drama series Numbers. He appeared as Seth Goldstein in Harold & Kumar Go to White Castle and its two sequels, Harold & Kumar Escape from Guantanamo Bay and A Very Harold & Kumar 3D Christmas. He is also known for his role as Bernard the Arch-Elf in The Santa Clause and its sequel, The Santa Clause 2. Additionally, he is known for his role as Mr. Universe in the 2005 film Serenity. He also played Michael, the AV geek, in 10 Things I Hate About You. 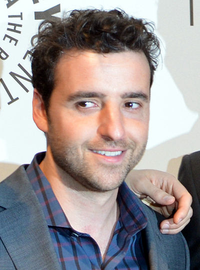 image credit
David Krumholtz by MingleMediaTVNetwork, is licensed under cc-by-sa-2.0, resized from the original.