David Choi (born March 22, 1986 in Anaheim, California, US) is an American musician and YouTube video producer based in Los Angeles. Choi's original songs and pop covers have been heard on NBC, FOX, VH1, MTV, A&E, E!, Travel Channel, Style Network, PBS, Food Network, Disney, as well as in commercials internationally. He has worked with companies such as Kellogg's, Starburst, the American Cancer Society, General Electric, Samsung, J. YouTube personalities, like Shane Dawson and Wong Fu Productions, often use Choi's music in their videos. 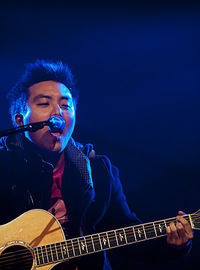 image credit
David Choi by Applewormy, is licensed under cc-by-sa-3.0, resized from the original.