Daria "Dasha" Dmitrievna Nekrasova (Belarusian: Дар’я "Даша" Дзмітрыеўна Някрасава, Russian: Дарья "Даша" Дмитриевна Некрасова; born February 19, 1991) is a Belarusian-American actress, filmmaker and host of the Red Scare podcast with Anna Khachiyan. In 2018, she became known as "Sailor Socialism", after her interview with an InfoWars reporter, in which she was dressed in a sailor fuku, went viral. In 2021, she made her directorial debut with the horror film The Scary of Sixty-First, for which she won the Best First Feature Award at the Berlin International Film Festival, and appears in a recurring role on the TV series Succession. 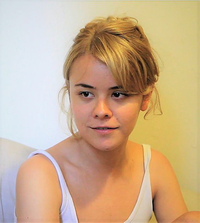 image credit
Dasha Nekrasova by After Hours Productions, is licensed under cc-by-3.0, resized from the original.