Cristiano Ronaldo dos Santos Aveiro, OIH (born 5 February 1985), known as Cristiano Ronaldo, is a Portuguese footballer who plays as a forward for Spanish club Real Madrid and captains the Portugal national team. He became the most expensive footballer in history when he moved from Manchester United to Real Madrid in 2009 in a transfer worth £80 million (€94 million/$132 million). Ronaldo's contract with Real Madrid, under the terms of which he is paid €21 million per year (after taxes), makes him the highest-paid footballer in the world, and his buyout clause is valued at €1 billion as per his contract. He took over the captaincy of the side in July 2008 and went on to captain Portugal to the semi-finals at Euro 2012 and finished the competition as the joint-top scorer. 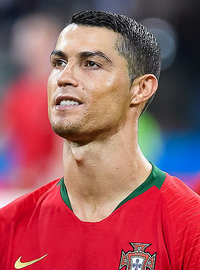 image credit
Cristiano Ronaldo by , is licensed under cc-by-sa-3.0, resized from the original.