Corinne Bailey Rae (born Corinne Jacqueline Bailey on 26 February 1979) is a British singer-songwriter and guitarist from Leeds, West Yorkshire. Bailey Rae was named the number-one predicted breakthrough act of 2006 in an annual BBC poll of music critics, Sound of 2006. She released her debut album, Corinne Bailey Rae, in February 2006, and became the fourth female British act in history to have her first album debut at number one. Her two albums have together sold over five million copies worldwide. 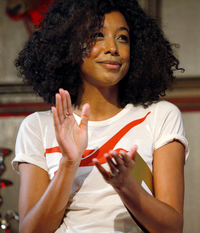 image credit
Corinne Bailey Rae by Simon Fernandez, is licensed under cc-by-2.0, resized from the original.