Constance Wu (born March 22, 1988) is an American actress. She has played supporting roles in the films Stephanie Daley, Year of the Fish, and The Architect. In television, she appeared on Law and Order: SVU and also played the role of "Laudine Lee" on the ABC show One Life to Live. Her films have been shown at Sundance Film Festival, Tribeca Film Festival, and many others. She has appeared in films/TV with such notable actors as Anthony LaPaglia, Tilda Swinton, Amber Tamblyn, Timothy Hutton, Connie Nielsen, Christopher Meloni, and Hayden Panettiere. She is from Richmond, Virginia. 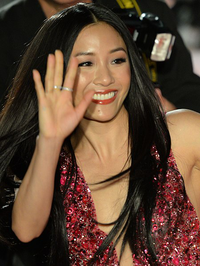 image credit
Constance Wu by John Bauld, is licensed under cc-by-2.0, resized from the original.