Christina Victoria Grimmie, (born March 12, 1994), known on YouTube as zeldaxlove64, is an American pianist and singer/songwriter known for her covers of hit songs by artists such as Miley Cyrus, Demi Lovato, Selena Gomez, Christina Aguilera, Justin Bieber, Katy Perry and many more. In June 2011, she released her debut EP, Find Me. In June 2012, she told a reporter that she wanted to stop doing covers and start writing only original music. The same month, Grimmie also revealed that she would be working with a new feature band, to be named Rising Tide, which is a teen group originally from her hometown area in New Jersey. In 2014, Grimmie participated in Season 6 of NBC's singing competition, The Voice. 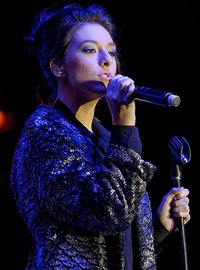 image credit
Christina Grimmie by Justin Higuchi, is licensed under cc-by-2.0, resized from the original.