Chris McKendry (born Christine McKendry February 18, 1968) has been a journalist for ESPN since 1996. Previously, she primarily served as co-anchor of the 11-1pm ET weekday block of live SportsCenter shows, alongside Jay Crawford. As of April 1, 2016, she now serves as an on-site host for ESPN coverage of the Australian Open, French Open, Wimbledon and US Open. 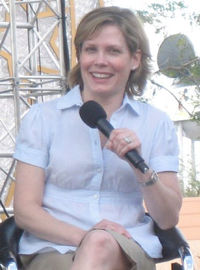 image credit
Chris McKendry by Dena, is licensed under cc-by-sa-2.0, resized from the original.