Charles Hermite (French pronunciation: ​[ʃaʁl ɛʁˈmit]) (December 24, 1822 – January 14, 1901) was a French mathematician who did research on number theory, quadratic forms, invariant theory, orthogonal polynomials, elliptic functions, and algebra.Hermite polynomials, Hermite interpolation, Hermite normal form, Hermitian operators, and cubic Hermite splines are named in his honor. One of his students was Henri Poincaré.He was the first to prove that e, the base of natural logarithms, is a transcendental number. His methods were later used by Ferdinand von Lindemann to prove that π is transcendental.In a letter to Thomas Stieltjes in 1893, Hermite famously remarked: "I turn with terror and horror from this lamentable scourge of continuous functions with no derivatives." 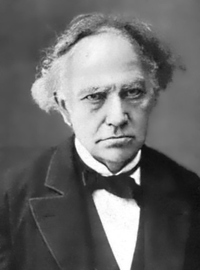