Walter Charles Dance, OBE (born 10 October 1946) is an English actor, screenwriter, and film director. Dance typically plays assertive bureaucrats or villains. Some of his most high-profile roles are Guy Perron in The Jewel in the Crown (1984), Dr. Jonathan Clemens in Alien 3 (1992), Sardo Numspa in The Golden Child (1986), Benedict in Last Action Hero (1993), and Tywin Lannister in HBO's Game of Thrones. 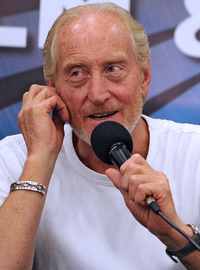 image credit
Charles Dance by Alan Chang, is licensed under cc-by-sa-2.0, resized from the original.