Carla Jimenez (born May 14, 1978) is an American television and film actress. She has had roles in series such as Lincoln Heights, My Name Is Earl and Little Britain USA, and has appeared in films including Miss March (2009) and Phat Girlz (2006). She has also been in such feature films as Nacho Libre, Lady in the Water, and Accepted. She recently was a recurring character on the TV show Better Off Ted for ABC, then signed on as a recurring character on the hit show Desperate Housewives. She has also appeared as a character named Virginia, in the independent cult film My Life with Morrissey by Andrew Overtoom in 2003. She currently plays the recurring role of Rosa on Raising Hope. She is also on the ABC sitcom Last Man Standing as Blanca, the Baxter's housekeeper. 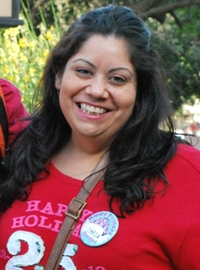 image credit
Carla Jimenez by Carla_Jimenez.jpg, is licensed under cc-by-sa-3.0, resized from the original.