Walter Bruce Willis (born March 19, 1955) is an American actor, producer, and singer. His career began on the Off-Broadway stage and then in television in the 1980s, most notably as David Addison in Moonlighting (1985–89) and has continued both in television and film since, including comedic, dramatic, and action roles. Probably best known for his role of John McClane in the Die Hard series, which were mostly critical and uniformly financial successes. 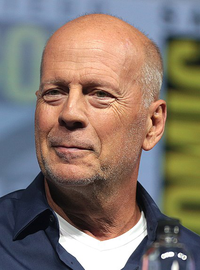 image credit
Bruce Willis by Gage Skidmore, is licensed under cc-by-sa-3.0, resized from the original.