Brittany Anne Snow (born March 9, 1986) is an American television and film actress and singer. She began her career as Susan "Daisy" Lemay on the CBS series Guiding Light (1998–2002) for which she won a Young Artist Award for Best Young Actress and was nominated for two other Young Artist Awards and a Soap Opera Digest Award. She then played the protagonist Meg Pryor on the NBC series American Dreams (2002–2005) for which she was nominated for a Young Artist Award and three Teen Choice Awards. Her subsequent television roles have included Ariel Alderman on Nip/Tuck (2005) and Jenna Backstrom on Harry's Law (2011). Her film roles include Zoe Plummer in The Pacifier (2005), Kate Spencer in John Tucker Must Die (2006), Amber Von Tussle in Hairspray (2007), Donna Keppel in Prom Night (2008), Emma Gainsborough in The Vicious Kind (2009), and Chloe Beale in Pitch Perfect (2012). 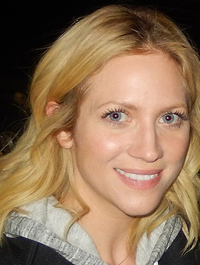 image credit
Brittany Snow by https://www.flickr.com/photos/greg2600/, is licensed under cc-by-sa-2.0, resized from the original.