William Gaither "Billy" Crudup (/ˈkruːdəp/; born July 8, 1968) is an American actor of film and stage. He is known for his roles as the guitarist Russell Hammond in Almost Famous, Will Bloom in Big Fish. He also starred in the 2007 romantic comedy film Dedication, alongside Mandy Moore. In 2009, he appeared as Doctor Manhattan in the film Watchmen and as J. Edgar Hoover in the film Public Enemies. Crudup also has experience in voice acting, having voiced the English version of the character Ashitaka from the Studio Ghibli animated film, Princess Mononoke. 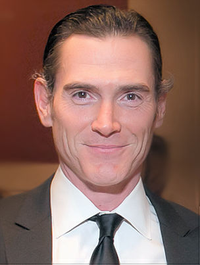