Annabella Avery "Bella" Thorne (born October 8, 1997) is an American teen actress, dancer, singer, and model. She is best known for her role as Ruthy Spiveyin the TV series My Own Worst Enemy, as Tancy Henrickson in the fourth season of Big Love and as CeCe Jones on the Disney Channel original series Shake It Up.She is set to star in Blended as Hilary "Larry", alongside Drew Barrymore and Adam Sandler. The film is set for release in the US on May 23, 2014. 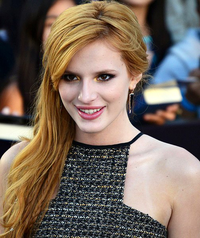 image credit
Bella Thorne by Mingle Media TV, is licensed under cc-by-sa-2.0, resized from the original.