Barkha Dutt is an Indian television journalist and columnist. She is a group editor with NDTV. Dutt gained prominence for her reportage of the Kargil War. Dutt has won many national and international awards, including the Padma Shri, India's fourth highest civilian honour. Critics have described Dutt as "controversial" and "pro Sonia Gandhi", and her reporting in 2002 Gujarat violence and 2008 Mumbai attacks as improper, irresponsible, theatrical and melodramatic. Dutt was one of the journalists taped in the Radia tapes controversy, and was described as the "face of the tapes scandal". 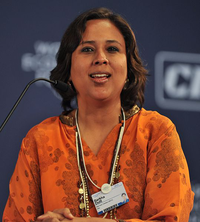 image credit
Barkha Dutt by World Economic Forum, is licensed under cc-by-sa-2.0, resized from the original.