Ashton Nicole Casey (born February 19, 1996), known professionally as Ashnikko (/æʃˈniːkoʊ/ ash-NEE-koh), is an American singer and rapper. She rose to prominence with her 2019 single "Stupid" with Yung Baby Tate, which gained viral popularity on the video-sharing platform TikTok and was certified gold in the United States and Canada. Ashnikko's debut mixtape, Demidevil, was released in January 2021, and spawned the singles "Daisy" and "Slumber Party" featuring Princess Nokia. 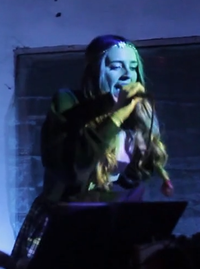 image credit
Ashnikko by Zane Zelmene, is licensed under cc-by-sa-3.0, resized from the original.