Sir Arthur Charles Clarke, CBE, FRAS (Sri Lankabhimanya Arthur Charles Clarke) (16 December 1917 – 19 March 2008) was a British science fiction writer, science writer, inventor, undersea explorer, and television series host.He is perhaps most famous for being co-writer of the screenplay for the movie 2001: A Space Odyssey, considered by the American Film Institute to be one of the most influential films of all time. His other science fiction writings earned him a number of Hugo and Nebula awards, along with a large readership, making him into one of the towering figures of the field. He was knighted by Queen Elizabeth II in 1998 and was awarded Sri Lanka's highest civil honour, Sri Lankabhimanya, in 2005. 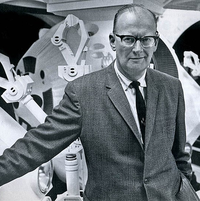 image credit
Arthur C. Clarke by ITU Pictures, is licensed under cc-by-2.0, resized from the original.