Anthony Kiedis (/ˈkiːdɪs/; born November 1, 1962) is an American singer-songwriter, best known as the vocalist/lyricist of the band Red Hot Chili Peppers with whom he has fronted since their inception in 1983. The band has recorded ten studio albums and as a member, Kiedis was an inductee into the Rock and Roll Hall of Fame in 2012. Kiedis is also an occasional actor, having appeared in F.I.S.T, Point Break, and The Chase. In 2004 he published his autobiography, titled Scar Tissue. 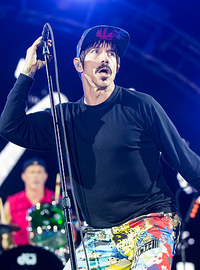 image credit
Anthony Kiedis by Sven Mandel, is licensed under cc-by-sa-4.0, resized from the original.