Anthony DeVante Edwards (born August 5, 2001) is an American professional basketball player for the Minnesota Timberwolves of the National Basketball Association (NBA). A shooting guard, he played college basketball for the Georgia Bulldogs. Edwards finished his high school career at Holy Spirit Preparatory School in his hometown of Atlanta, where he was rated a consensus five-star recruit and one of the best players in the 2019 class by major recruiting services. As a senior, he earned McDonald's All-American and USA Today All-USA first team honors. He committed to play college basketball for Georgia, becoming the most heralded recruit to do so, and was named SEC Freshman of the Year after his freshman season with the team. He was selected with the first overall pick by the Minnesota Timberwolves in the 2020 NBA Draft. 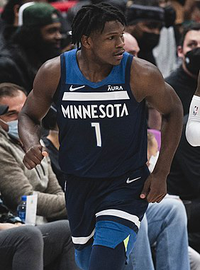 image credit
Anthony Edwards (basketball) by All-Pro Reels, is licensed under cc-by-sa-2.0, resized from the original.