Anna Kendrick (born August 9, 1985) is an American actress and singer. She rose to international fame after her performance as Natalie Keener in Up in the Air (2009), for which she received Academy Award, BAFTA, Golden Globe, and Screen Actors Guild Award nominations for Best Supporting Actress. She played Dinah Lord in the Broadway musical High Society (1998), for which she was nominated for a Tony Award. Her other notable roles include Fritzi Wagner in Camp (2003), Jessica Stanley in The Twilight Saga (2008–11), Stacey Pilgrim in Scott Pilgrim vs. the World (2010), Beca Mitchell in Pitch Perfect (2012), and Janet in End of Watch (2012). 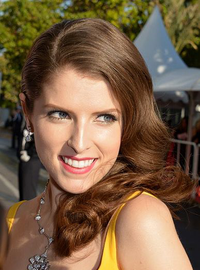 image credit
Anna Kendrick by Georges Biard, is licensed under cc-by-sa-3.0, resized from the original.