Andrew Clement "Andy" Serkis (born 20 April 1964) is an English film actor, director and author.Serkis is best known for his performance capture roles comprising motion capture acting, animation and voice work for such computer-generated characters as: Gollum in The Lord of the Rings film trilogy (2001–2003) and The Hobbit: An Unexpected Journey (2012), King Kong in the eponymous 2005 film, Caesar in Rise and Dawn of the Planet of the Apes (2011, 2014) and Captain Haddock in Steven Spielberg's The Adventures of Tintin (2011). Serkis' film work in motion capture has been critically acclaimed, earning him recognition from many associations that do not traditionally recognise motion capture as "real acting". 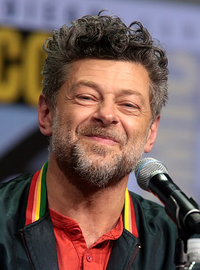 image credit
Andy Serkis by Gage Skidmore, is licensed under cc-by-sa-3.0, resized from the original.