Zara Maria Larsson (born December 16, 1997) is a Swedish singer.She received national fame for winning the 2008 season of the talent show Talang, the Swedish version of Got Talent. Zara signed with the record label TEN Music Group in 2012 and released her debut EP album Introducing, in January 2013. The single "Uncover" topped the charts in Sweden, Norway, and Denmark. Both the single "Uncover" as well as the album Introducing were certified triple platinum in July 2013 by Universal Music Sweden. Zara also signed a three-year contract with Epic Records in the United States in April 2013. She lives with her mother, father and her younger sister. Zara's first arena show will be held in Stockholm, Sweden, on the 11th of april, 2015. 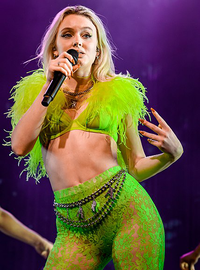 image credit
Zara Larsson by Justin Higuchi, is licensed under cc-by-2.0, resized from the original.