Zachary Brendan "Zach" McGowan (born 1981) is an American film and television actor and voice-over artist. He is best known for his role as Jody in the television series Shameless. Other highlights include parts in the films Terminator Salvation, The Hunt for Eagle One, and the sequel The Hunt for Eagle One: Crash Point. He guest-starred in the television series Numb3rs, CSI: Miami, and Cold Case, with voice-over work for the Scream Awards, Animal Planet and the video games Tom Clancy's Ghost Recon: Future Soldier, Resident Evil: Operation Raccoon City, and Iron Man. 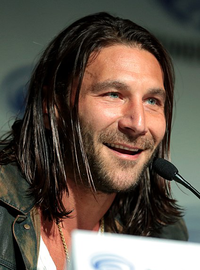 image credit
Zach McGowan by Gage Skidmore, is licensed under cc-by-sa-3.0, resized from the original.