Henry Warren Beatty (/ˈbeɪti/ BAY-tee; born March 30, 1937) is an American actor, producer, screenwriter and director.Beatty has been nominated for 14 Academy Awards, and has won the Best Director Award and the Academy's highest honor, the Irving G. Thalberg Award. He has been nominated for 18 Golden Globe Awards and won six, including the Cecil B. DeMille Award in 2007. Beatty is the only person to have been nominated for best producer, director, writer and actor in the same film — doing so twice (for Heaven Can Wait and Reds). 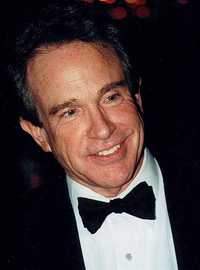 image credit
Warren Beatty by Kingkongphoto & www.celebrity-photos.com, is licensed under cc-by-sa-2.0, resized from the original.