Yvonne De Carlo (born Margaret Yvonne Middleton; September 1, 1922 – January 8, 2007) was a Canadian American actress, singer, and dancer whose career in film, television, and musical theatre spanned six decades. She obtained her breakthrough role in Salome, Where She Danced (1945), produced by Walter Wanger, who described her as "the most beautiful girl in the world." Success followed in films such as Criss Cross (1949) and The Captain's Paradise (1953). Her film career reached its peak when director Cecil B. DeMille cast her as Sephora, the wife of Moses, her most prominent role, in his biblical epic The Ten Commandments (1956).After her lead performance in Band of Angels (1957) and supporting role in McLintock! (1963), she played Lily Munster, the wife of Herman Munster, in the CBS sitcom The Munsters (1964-1966). 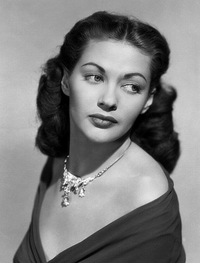