Yousra (/ˈjɔːsrə/ YAWS-rə; Arabic: يسر'ى‎‎, IPA: [ˈjosɾɑ, ˈjʊsɾɑ]) is an Egyptian actress and singer. Her birth name is Civene Nassim, Egyptian Arabic pronunciation: [siˈveːn næˈsiːm]. She is the sister-in-law of actor Hesham Selim, son of famous Egyptian football player, actor and former president of Al Ahly, Saleh Selim. Yousra is considered as a glamorous icon for the Middle East and is an influential voice in the region. 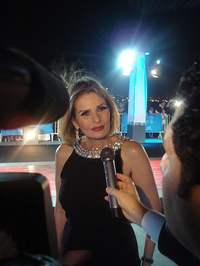 image credit
Yousra by daly3d abd, is licensed under cc-by-2.0, resized from the original.