(This is a Chinese name; the family name is Yao (姚).) Yao Ming (Chinese: 姚明; born September 12, 1980) is a Chinese retired professional basketball player who played for the Shanghai Sharks of the Chinese Basketball Association (CBA) and the Houston Rockets of the National Basketball Association (NBA). He was selected to start for the Western Conference in the NBA All-Star Game eight times, and was named to the All-NBA Team five times. At the time of his final season, he was the tallest active player in the NBA, at 2.29 m (7 ft 6 in). He is the only player outside of the United States to lead the NBA in All-Star voting. Yao, who was born in Shanghai, China, started playing for the Shanghai Sharks as a teenager, and played on their senior team for five years in the Chinese Basketball Association (CBA), winning a championship in his final year. After negotiating with the CBA and the Sharks to secure his release, Yao was selected by the Houston Rockets as the first overall pick in the 2002 NBA draft. He reached the NBA Playoffs four times, and the Rockets won a first-round series in the 2009 postseason, their first playoff series victory since 1997. In July 2011, Yao announced his retirement from professional basketball because of a series of foot and ankle injuries which forced him to miss 250 games in his last six seasons. In eight seasons with the Rockets, Yao ranks sixth among franchise leaders in total points and total rebounds, and second in total blocks. Yao is one of China's best-known athletes, with sponsorships with several major companies. His rookie year in the NBA was the subject of a documentary film, The Year of the Yao, and he co-wrote, along with NBA analyst Ric Bucher, an autobiography titled Yao: A Life in Two Worlds. In April 2016, Yao was elected into the Naismith Memorial Basketball Hall of Fame, alongside Shaquille O'Neal and Allen Iverson. 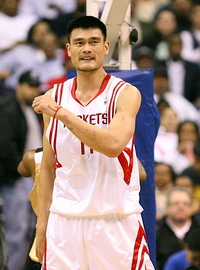 image credit
Yao Ming by Keith Allison, is licensed under cc-by-sa-3.0, resized from the original.