Woodrow Charles "Woody" Herman (May 16, 1913 – October 29, 1987) was an American jazz clarinetist, alto and soprano saxophonist, singer, and big band leader. Leading various groups called "The Herd," Herman was one of the most popular of the 1930s and 1940s bandleaders. His bands often played music that was experimental for its time. He was a featured halftime performer for Super Bowl VII. 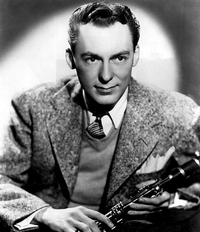